Does the Average Represent the Batch? - Every product in one batch is labeled with the same potency… but no two products are exactly the same. 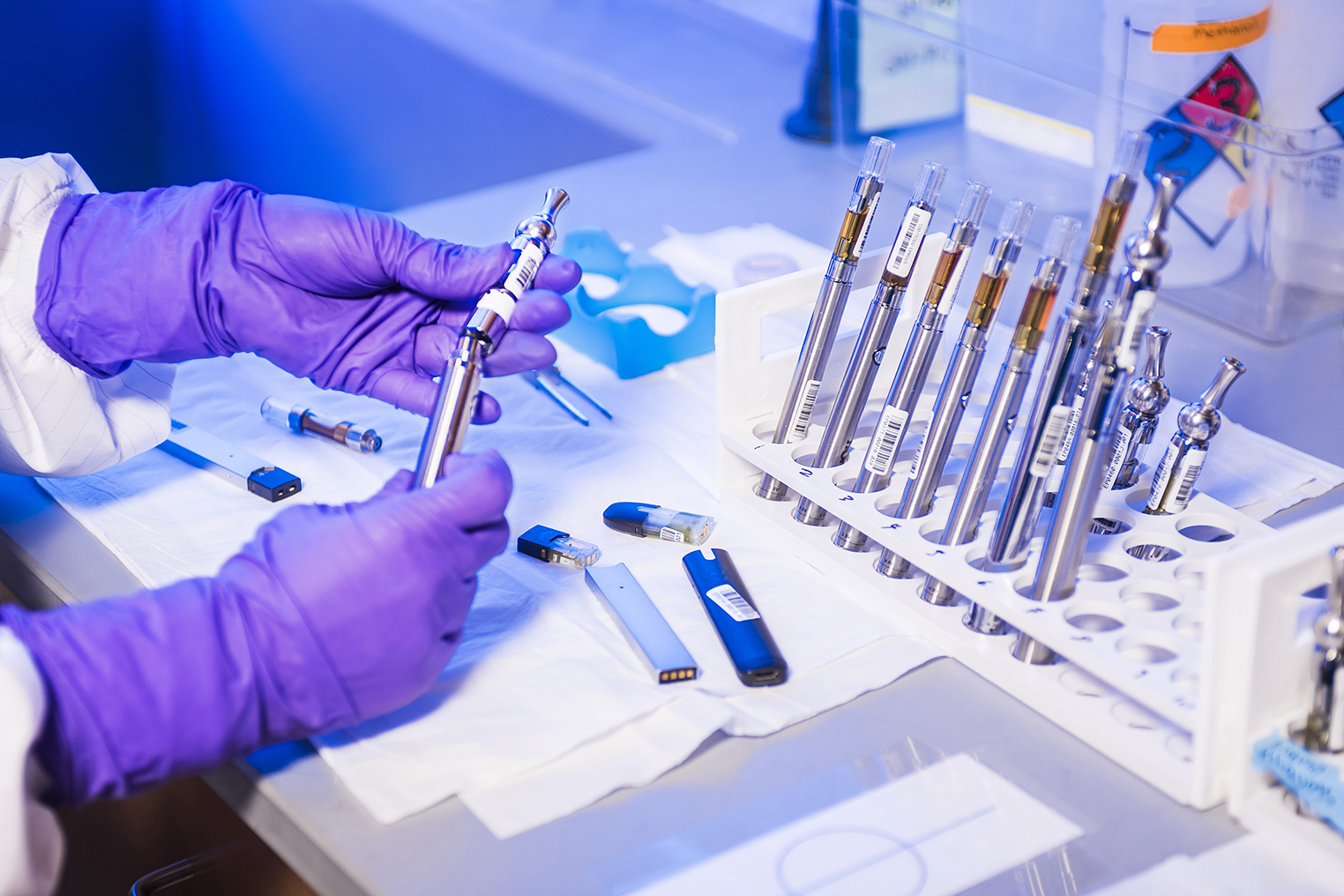 As we’ve seen in our series about interpreting THC potency (and really, the potency of all the different kind of chemicals that make up a cannabis product,) knowing the Average Potency of the batch is important… but it’s really only half the story.

If you harken back to junior high math class, you’ll remember that when analyzing a set of numbers, what matters is not just the Average, but the Range of the numbers. In other words, how far do these numbers spread out on a timeline? And how much do they generally differ from the set’s Average?

Let’s assume we have a batch of 1000 vape cartridges, all produced at the same time, from the same container of concentrated cannabis oil. We take a few of the carts back to the lab for analytical testing (we can’t take them all, because once a cart is tested it's considered contaminated, and we have to trash it.) We find that, together, these few carts have an average THC potency of 64%.

As the figure below demonstrates, there are several different ways we could have arrived at that Average potency. 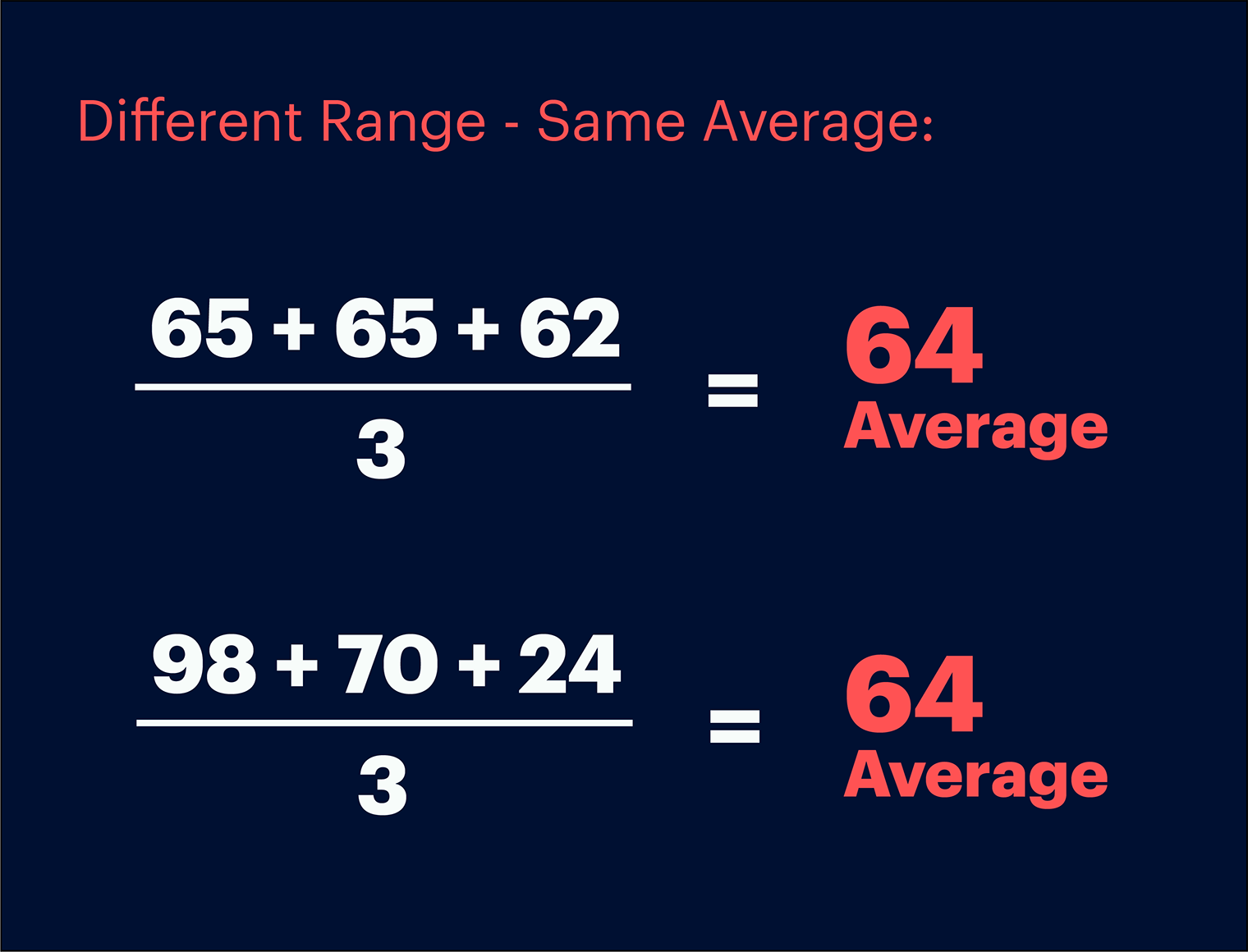 There are many different ways to arrive at the same Set Average.

As you can see, not only can we reach a 64% Average in a nearly infinite number of ways, there’s also a large discrepancy in just how well the Average represents each set of numbers. In the first Set, its clear that the potencies of each individual vape cart are pretty close together. (They’re all within ±2% of the average, if we were to calculate it out.) However, in the second set, the closest vape cart potency is 6% different from the Average, while the furthest is 46% away from the Average!

So why does this matter? Because the Average potency is what’s written on the back of every vape cart sold from that batch! Regardless of that cart’s actual potency!

That means, in theory, that the vape cart you just purchased because it boasted a 64% THC level could contain just 24% THC! (Don’t freak out yet, this is just a hypothetical situation. In real life the gap between the label and reality won’t be that big... if you live in Oregon. We have an upper limit on just how much products can differ from the Batch Average, legally. Unfortunately, not all states do.)

The Average Distance From the Average

Luckily, when evaluating different vape carts from the same production batch, we have a way to quantify exactly how much of a gap there is between their potencies. This also gives us a good idea of the homogeneity, or uniformity, of the batch.

This magical concept we’re referring to is known in the math world as the Relative Standard Deviation (RSD). Essentially, the RSD is the average distance between each sample potency and the Batch Average. The reason this figure is so important is because it tells us just how confident we should be about applying that Average Potency (64% in our example) to the entire batch.

To put it another way, the RSD tells you the likelihood that the vape cart you just purchased actually contains the amount of THC that’s listed on the package.

Does this THC Sauce have the same potency as these THC Diamonds? Probably not.

That’s something you as a consumer might, ya know, be interested in. One could, if one were so inclined, make the argument that the RSD is the single most important testing statistic that is excluded from the product label… and perhaps that’s something that should be reconsidered.

That’s because, as you may recall, that gram of cannabis oil you’re about to smoke has never actually been tested. If it had been, its remains would be in the laboratory trash can.

All we at the lab can do is test some of the oil that was adjacent to that bit that ended up in your vape cart. We do that a bunch of times, and then calculate the Average potency. The entire batch of oil gets assigned that Average potency, and every vape cart made from the oil gets labeled with it. The lower the RSD of all those samples we take, the higher the chance that the THC% advertised is actually the potency of the gram of product you’re holding.

The lower the Relative Standard Deviation, the higher the chances that the THC% advertised is actually the potency of the gram of product you’re holding.

The Mathematical (or Nerdy, take your pick) way to say this is - the Standard Deviation of any set of numbers tells you how precisely that Average represents the whole data set. Do most of the numbers in this set agree with each other, or are the data points all over the place?

Here are the potencies for some samples pulled from 2 different batches of cannabis oil. (The story you are about to hear is true. Only the names have been changed to protect the innocent.) Each 1-gram sample of oil was taken from a different location in the batch, and tested for THC content separately. Then those potencies were used to calculate the batch average. Note that both batches have the same average potency: 53% THC.

The batch of OG Kush oil was clearly well homogenized. Every gram of oil we pulled for sampling had a potency very close to the 53% Batch Average.

Samples from across this well homogenized batch of oil are very similar in potency, meaning they have a small Relative Standard Deviation.

Then there’s the Stardawg Oil. This batch was clearly not well homogenized, as the THC concentration was very different depending on where in the batch we pulled a sample from. The range of potencies in this batch of oil is huge, which means the Relative Standard Deviation is also huge.

A less homogenized batch of oil produces samples with a massive range, most of which are very distant from the Set Average.

Because all of the potencies in the OG Kush were fairly close together, and fairly close to the 53% Batch Average, the Relative Standard Deviation for that batch is very small. Alternatively, the Stardawg shatter has a very high RSD, because the data points are all over the place. The Average is still 53% THC, but none of the samples taken had anything even close to potency.

Disclaimer: These graphics provide a very simplified explanation of RSD. If you’re a real stickler for doing the math yourself instead of trusting what you read in online blog posts, (and good for you if you are) you can calculate the precise Relative Standard Deviation for each batch, using the following equation: 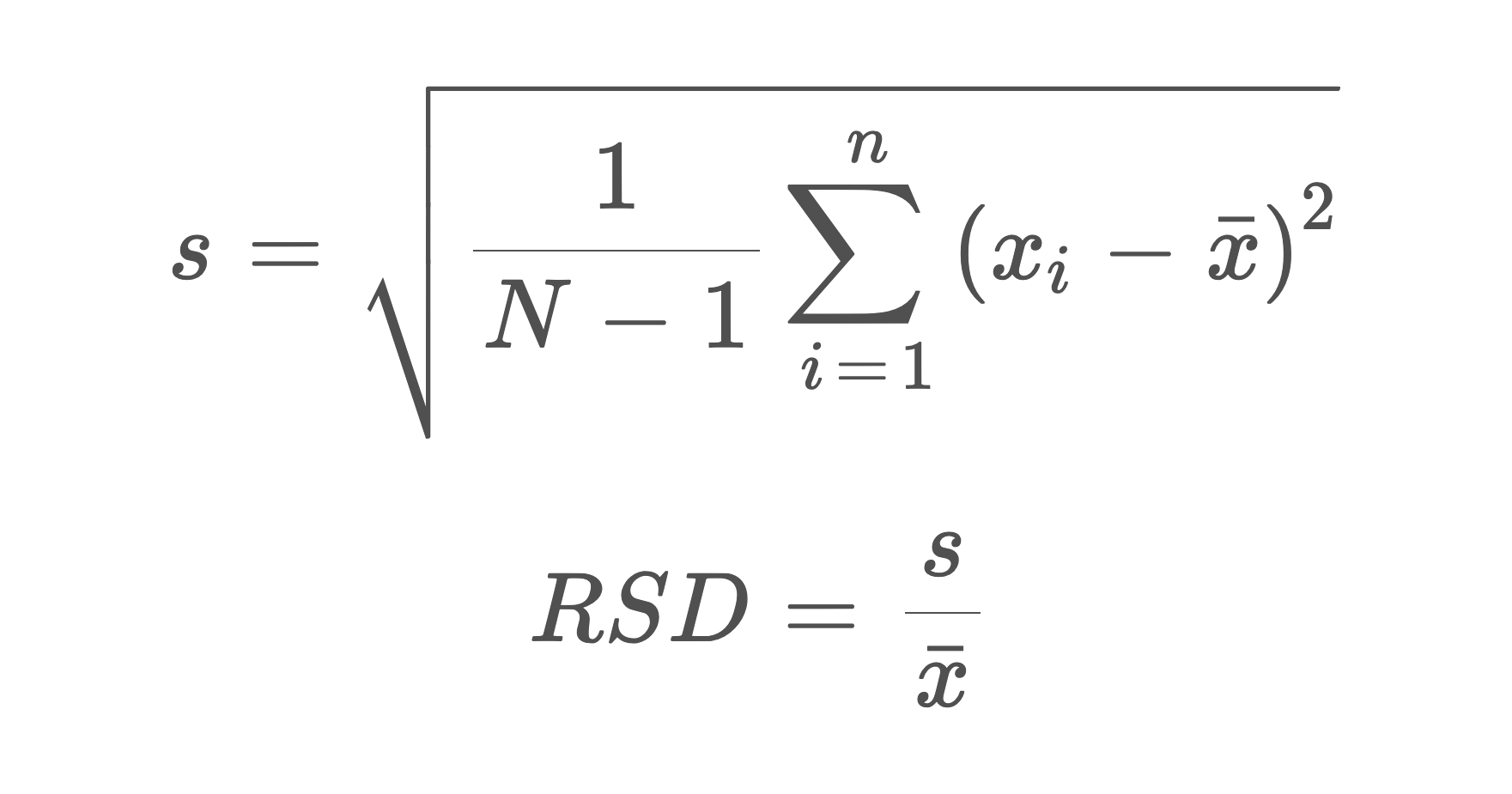 Here’s the important point to remember - both the Stardawg and the OG Kush batches have the same Average Potency: 53% THC. This should drive the point home that the quality of a batch cannot be determined by Average Potency alone.

In fact, the RSD almost tells us more about the batch as a whole than the Average Potency does. Mainly, it tells us just how much chemical variation we can expect in any given gram of this product.

While this information is extremely useful… we all know that most consumers are not going to waltz into dispensaries and casually ask their Budtenders for the Relative Standard Deviation of a vape cartridge. Which is why the state of Oregon put a 20% RSD cutoff in place. This limit is a way to say, ‘a batch must be a certain level of uniform before we can call it safe.’

On top of that, dispensaries can educate their Intake Managers about RSD, and how to read the lab Certificates of Analysis for each batch. The more the dispensaries understand about how the RSD affects the quality of a batch, the greater chance you, as a consumer, have of getting a product whose actual potency matches what’s on the label.

While we at Lightscale Labs can’t promise that the average potency we assign to the batch will be the true potency of every vape cart, flower nug, or gram of shatter from that batch, we can offer the assurance that every gram is extremely chemically similar to every other gram, by ensuring the batch has a low Relative Standard Deviation.

Armed with this knowledge, you can feel confident in your understanding of the potency test results on your Certificate of Analysis.