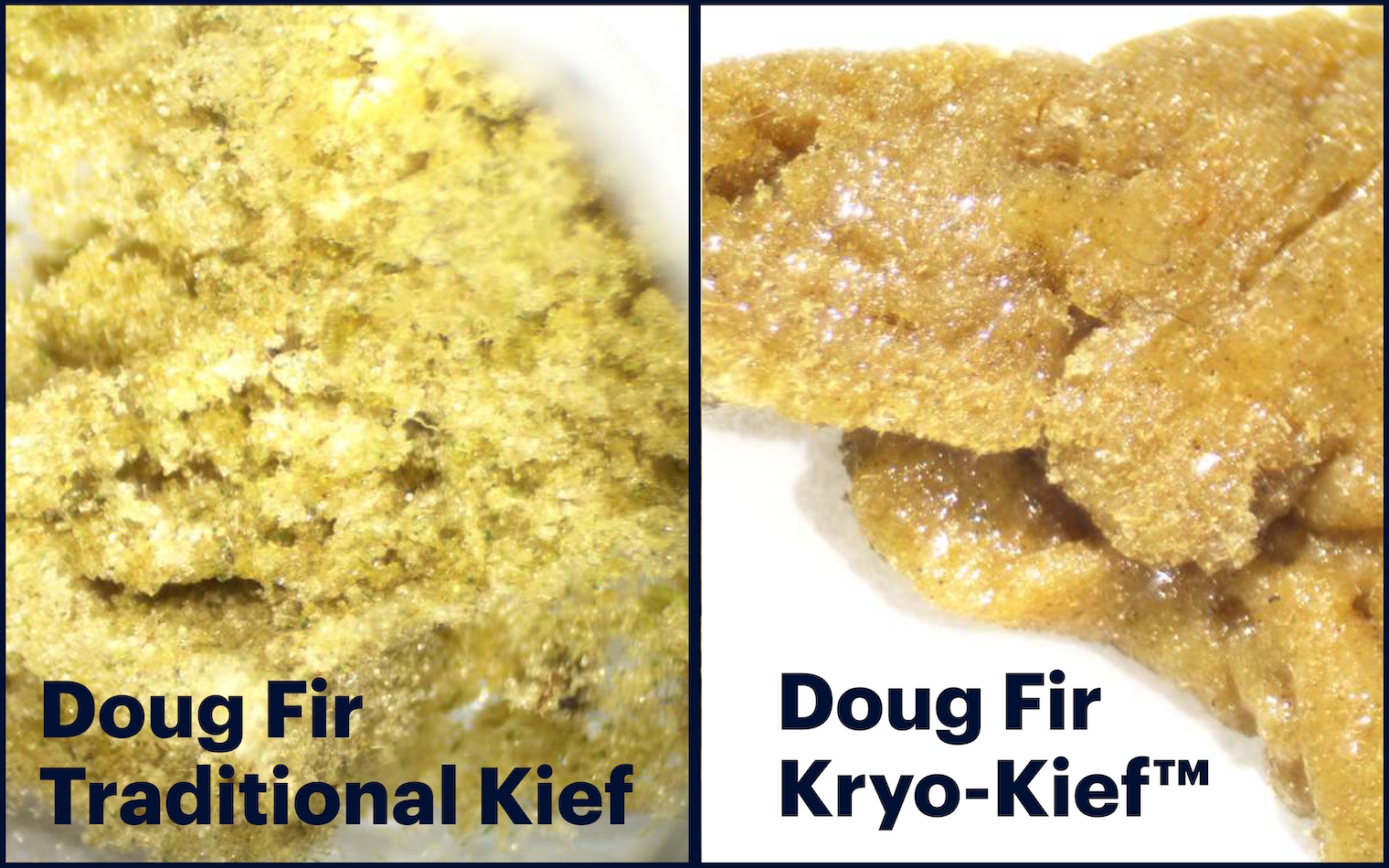 A photo comparison of Kiefs made from the same batch of Doug Fir cannabis flower. One was made using traditional production methods, while the other is the product of a new solventless extraction method. Photos by Lightscale Labs.

Lighscale Labs is honored to have played a part in the revolutionary new research conducted by Portland visionary and Director of Production Science for Prūf Cultivar, Jeremy Plumb, in tandem with the legendary neurologist, author, and researcher responsible for much of what we know about cannabis science, Dr. Ethan Russo, MD.

In the recent journal article, this all-star team of cannabis scientists explain the merits of their new extraction method, designed to preserve as many cannabinoids (major & minor) and terpenoids (not just terpenes) as possible. Using dry ice on fresh-cut flower, they were able to collect and isolate a high percentage of intact trichomes, and the desirable chemicals those trichomes contained. Whatrsquo;s more, this high-potency kief was produced without the use of any of the harsh solvents often used for cannabis extraction, which can be harmful to the health of consumers.

To complete this research, the team left several different cultivars (strains) of cannabis exposed to frozen CO2 vapor for two full days. The around -100° F vapor creates a subfreezing environment with minimal oxygen exposure, allowing a good portion of the delicate trichomes to freeze off the plant without sustaining damage. To collect the remaining cannabinoid-and-terpene-containing trichomes, the now-frozen flower was then placed inside a rotating cylindrical screen and sifted. The entire sifting device was kept at 0° F for the full 20 minute cycle. The resulting ‘Kyro-Kief’ product is a blend of these two extracts.

Analysis by Lightscale Labs, through gas and liquid chromatography, has revealed that the extract produced by this novel process has fascinatingly high potencies of both cannabinoids and terpenes. Most impressively, it seems to contain the same profile, and ratios, of terpenes and cannabinoids as the original fresh flower. This includes delicate and hard to capture monoterpenoids, as well as acidic cannabinoids, like THCA, that might otherwise be decarboxylated during the extraction process. 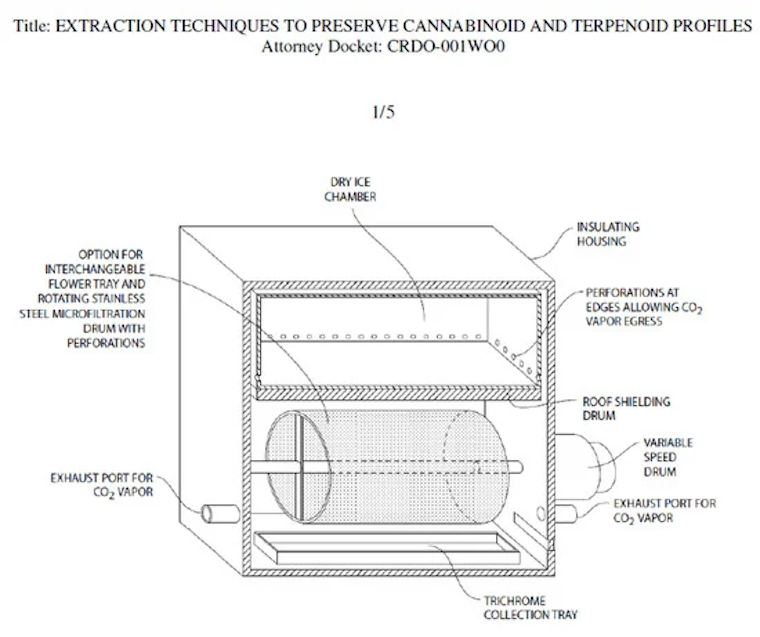 While using CO2 to strip cannabis of its desirable chemicals is not a new idea, extraction is typically done with ‘supercritical’ CO2, a substance which needs heat and pressure to maintain its unique part-gas-part-liquid properties. Those environmental conditions can alter or degrade cannabinoids and terpenes before they reach the consumer. On top of that, in typical extraction machines the cannabis biomass is only in contact with supercritical CO2 for a short period of time. The quick exposure process often leaves behind valuable terpenes, like Limonene and Myrcene.

Contrast that with the Kyro-Kief™ extraction process, in which flower is laid directly on a bed of dry ice and surrounded by a flow of CO2 gas for a full 48-hours.

For comparison, the researchers tested a batch of conventionally-dried Kashmir Blue flower, as well as the product created by supercritical CO2 extraction of that flower. Not only was all the THCA and CBDA decarboxylated during the extraction process, there was a near-total loss of terpenes like pinene, fenchol, and α-terpineol. While cannabinoids did become highly concentrated in the extract (from 20% of the flower weight to nearly 72% of the extract weight,) the terpene content only increased slightly (from 2.2% of the flower weight to 2.4% of the extract weight.) In other words, the ratio of cannabinoid to terpene went from 10:1 in the dried flower, to about 30:1 in the extract. This means that quite a large mass of terpenes was either destroyed, or not transferred to the final product.

Amazingly, Kyro-Kief™ appeared to contain nearly the same cannabinoid to terpene ratio as the original flower. In tests conducted by Lightscale Labs, freshly harvested Ursa Major flower clocked in at around 30% total cannabinoids (mainly THCA and CBGA) and 1.4% total terpenes of varied flavor. Some of this flower went through the experimental extraction method to produce Kyro-Kief™, while some was conventionally dried and sifted to collect the trichomes and their contents. (Conventionally dried is called “dry kief” on the graphs below.) 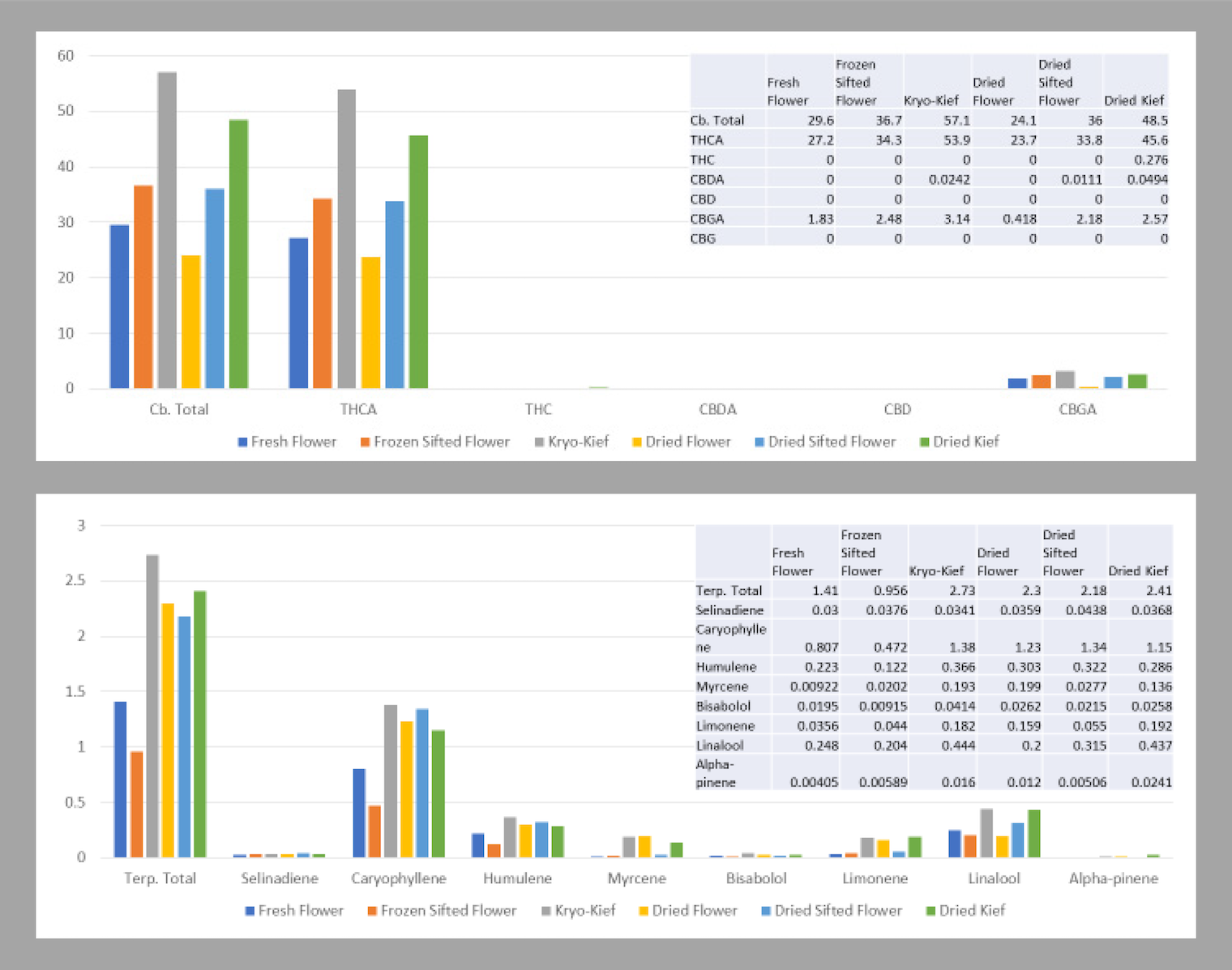 For all cultivars tested, Kyro-Kief™ had higher potencies of both cannabinoids and terpenes than the traditional “dry kief.” (As an example, Ursa Major Kyro-Kief™ potencies were C 57% & T 2.7%, versus C 48% & T 2.4% in the Doug Fir traditional kief. See graphs above.) Some Kyro- Kief™ samples saw cannabinoid concentrations as high as 60.7%. Plumb and Russo point out that the experimental product was also notably cleaner with “no green chlorophyll tinge.”

Said Jeremy Plumb, “The novel solventless method described did attain greater fidelity in concentrate to the original phytochemical inventory in the starting material than anything I’ve seen.” Translation? Kyro-Kief™ contains the most true-to-flower cannabinoid and terpene profile of any extract we’ve seen.

Now, the research team acknowledges that the medical science about terpene-cannabinoid interaction in the human body remains inconclusive. Besides that, not all processors are interested in making products with high terpene content. If you happen to be one of these processors, you may still be interested to know this- while the traditional “dry kief” weighed in at about 1.3% of the original fresh flower weight, the Kyro-Kief™ process turned a whopping 7% of the flower, by mass, into a consumable product. That’s a more than 5-fold increase in product weight.

Back to Blog Posts